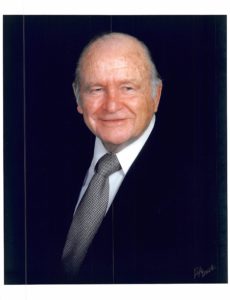 Inducted April 16,2011
Robert W. Doucette was the primary motivator and fundraiser for the Pettit National Ice Center in Milwaukee, WI. It was the tireless and persistent efforts of Robert that turned the $13.5 million Pettit facility into a reality. His greatest attributes were his persistence, pragmatic approach, and never-give-up attitude. Robert’s interest in speedskating goes back to his youth where he competed at local rinks and ponds. A lifelong Milwaukeean – Robert felt it was very important to promote his city and get involved in civic activities.

As the President and CEO of Milwaukee Insurance, Doucette decided to become a major sponsor of the US Speedskating team, backing the likes of Bonnie Blair, Dan Jansen, Nick Thometz, Eric Flaim and a host of other world-class athletes. But one of the more fun and unique events he created was the Milwaukee Insurance Cup Speedskating Challenge, featuring elite athletes competing in a variety of off-beat events ranging from relay races, pack style racing clockwise (vs. the tradition counter-clockwise) and even cafeteria tray sliding contests. In the 1980’s, with the Olympic Rink continually in need of repair and the sport of speedskating moving indoors, Robert led the charge for an enclosed speedskating oval. The public sector said it couldn’t be done. The private sector claimed it didn’t have the funds to support such a project of this magnitude. Yet, despite these naysayers, he persevered.

“Someone telling my dad that he cannot do something, motivated him to prove them wrong,” says Robert’s son “Although the Pettit died a dozen deaths, my dad never gave up. He was a natural leader with impact, based on his love for the community and love for sport and once he gets focused on something he brings a lot of people with him.”

After nearly a three-year effort, on New Year’s Eve 1993, Robert saw his dream of building an enclosed ice center become a reality with the grand opening of the Pettit National Ice Center. He made this happen by forming partnerships with businesses and influential individuals to raise funds. It was through his connections with the Governor and legislators that the center was able to secure land and funding from the public sector. Robert also negotiated with the U.S. Olympic Committee to secure the designation as a U.S. Training Facility. Along the way, he made friends with George Steinbrenner, who played a key role in endorsing the project. Robert even took charge of orchestrating the facility’s design and oversaw much of the building phase. He later served as the Pettit Center’s first Chairman of the Board, Director on the Board of Directors, and was designated with Director Emeritus status.
Robert was inducted to the National Speedskating Hall of Fame on April 16, 2011 in Milwaukee, WI.