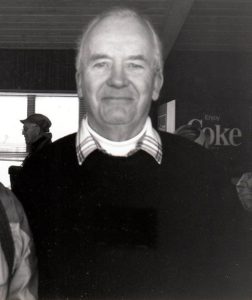 Inducted May 30, 2014
Bob Planert was known in Canadian skating circles as “Pops”. He was a skating “dad” to countless skaters (and their parents) across the country. He started his love of the sport as a boy in Chicago’s Silver Skates and moved from there to making Planert Specials for countless premier skaters in the United States. Attending meets all over North America, Bob delighted in skaters’ successes, tried to find simple technical equipment solutions to their problems, and always worked the media to present the sport in the best possible fashion.

From the beginning of his interest in the sport, Bob was the penultimate promoter of the sport. He was a friend to every kid he came across, in the clubhouse or at the starting line. After moving to Kitchener, Ontario in 1960, he became a key driver in a local service club, Sertoma, winning the right to hose the Canadian Outdoor Championships in 1961. He worked tirelessly with the print and television media, always promoting the sport in a hockey-mad area.

Upon his retirement, he took up starting, working his way up to becoming a Level 3 starter. His most meaningful accomplishment was being the starter for the Special Olympics, in Toronto. His heart melted at the wonderful athletes on the start line.

Bob officiated as a timer in many US National Championships in the ‘50’s and at many US and Canadian competitions for the next 30 plus years. He was a National Level Starter and worked a number of North American Championships and a World Cup competition.

His heart remained true to the sport up to his passing in 2010. Bob was inducted into the National Speedskating Hall of Fame on May 30, 2014 in Milwaukee, WI.