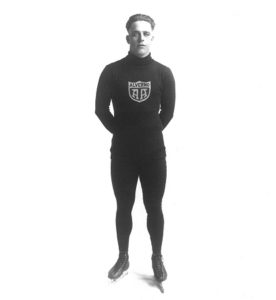 Roy was born August 2, 1895. During his lifetime he achieved the title of International Champion.

McWhirter started skating at the age of 10 and throughout his skating career accumulated about 400 medals, 50 cups, several plaques, and many championships. McWhirter saw his dedication to speed skating culminate at the national championships in 1922. In Plattsburg, NY he took first place in the final heat of a half-mile race. With the win, he took home the National Ice Title. He entered the final race tied with Charles Jewtraw to secure the win. In the same year, McWhirter also served as a coach for Chicago in the five city schoolboy contest, which Chicago ending up winning on February 25, 1922. After retiring from competition he remained involved in the sport as a coach, official, and advocate for the sport. He was an assistant judge at the 1932 Olympic Games. He was inducted into the National Speedskating Hall of Fame on May 20, 1961 in Minneapolis, Minnesota.