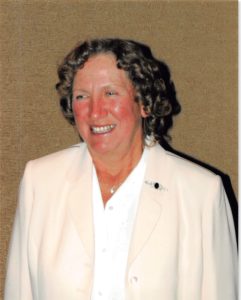 Ruth Santos began speed skating at the Boston Silver Skates meet. Her first attempts were in figure skates and she did well enough to make a few finals. Her dad decided that perhaps she had a future in the sport and bought a pair of long blades for her. From this modest beginning, Ruth went on to capture the North American Outdoor Championship in 1971 and the National Outdoor Championship in 1972, both in the Senior Class.

Following her junior year at Boston University, Ruth married Chuck Moore. Beginning in 1969, Ruth and Chuck guided the faltering Northeastern Skating Association back to viability within the ASU. Over the years, the program had sessions in 10 -15 rinks, which constantly encouraged new speed skaters to enter the sport. Ruth served as the chief coach for all of this activity.

After years of coaching, Ruth graduated to officiating and became a National level referee. She served as the chief at several Nationals and North American Championships. At the national level, Ruth has served on several committees and chaired the North American Committee. Working with ASU President Bill Anderson and Canadian Amateur Speed Skating Association (CASSA) representative Joyce Leggatt, they brought the North American Championship competition from near oblivion and restored it to the premier meet it was intended to be. She was inducted to the National Speedskating Hall of Fame on April 24, 2004, in Saratoga Springs, New York.