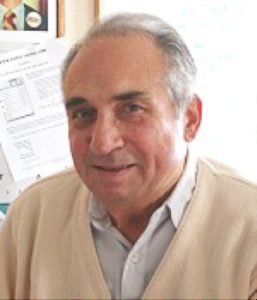 Inducted May 16, 2015
Sam Poulos has coached skaters from the local to international levels for over 70 years including age level State and National Champions, World Cup Members and Champions, World Sprint Champions and Olympic Medalists. His innovative ideas and laid-back approach make him one of the most successful and respected American speed skating coaches in the history of the sport.

After 15 years as club Manager for Northbrook Skating Club, Sam broke away and started the Mid-America Speed Skating Club in 1987 because he felt the higher dues most clubs had started charging prohibited many people from participating in the sport. To him, it was more important for anyone interested in skating to have an opportunity to get on the ice and not have to worry about paying dues.

Sam started as a pleasure skater himself, buying first pair of speed skates as a teenager on Maxwell Street in Chicago – “a beautiful pair of Planerts.” Sam skated on the ‘long blades’ at Clark’s playground on Jackson Boulevard, which was flooded to host winter ice sports.

Annually, Northbrook Skating Club successfully hosted the North Shore Open, which always attracted the best skaters. To prepare for practice and meets, Sam was one of the faithful who would get up at 2 or 3 am to go help flood the rink at Meadowhill Park. During pack-style meets, Sam’s wife, Nelda, would tend to the concessions – making and serving sloppy joes and hot chocolate. Sam and Nelda were always supportive and encouraging of not only their own children, but all the skaters, often driving to the meets with a carload of skaters.

Sam’s famous summer dry-land training workouts were open to all. Sam used unique techniques including timed, metronomic ‘beeps’ at tempo to accompany hill workouts and dry skating “the track” to a Latin beat for up to 3000 meters. These workouts were well attended and were well known in the Midwest. This “skating-specific training” contributed to better results for participating skaters of all levels. Shani Davis often attended these workouts and dubbed Sam the LBC-“Laid Back Coach”. Although the hill workouts could be grueling, many of the days and evenings were enchanting with many generations of skaters stopping in to show support for the current participants and chat with Sam. Sam believed in all of the skaters that he coached on the ice and off, on the hills and off. In turn, these skaters learned how to believe in themselves. He was inducted into the National Speedskating Hall of Fame on May 16, 2015 in Minneapolis, MN.