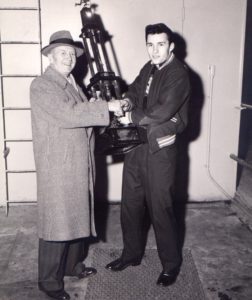 Stephen S. Stenson has been active in sports, such as baseball, softball and golf, throughout his life. But the sport he was most involved and passionate about was speedskating. Over a twenty year span, Stenson has enjoyed competing, coaching, and recreational speedskating. His interest in speedskating began during World War II after receiving a pair of ice skates from his mother as a Christmas present. Stenson initially started skating with his father, uncle, and cousin and later started competing in weekly races at the Brooklyn Ice Palace. Between his first race in 1956 and his final race at Saranac Lake New York in 1963 Steve won: 1957 National Indoor Champion; 1959 National Indoor Champion (tie with Dick Hunt); 1960 North American Indoor Champion; National Indoor Record, ¾ mile, Senior, 1959 (Champaign, IL).

Stenson’s speedskating career paused when he assumed his duties as an officer in the U.S. Air Force in 1961. Stenson was commissioned as a Second Lieutenant in the U.S. Air Force where he was initially stationed at Plattsburgh Air Force Base. During his time stationed at the base, he continued to skate while coaching the Plattsburgh Speedskating Club for two years. He returned to racing in 1963 and won his final race in the 220 yards in Saranac, NY, after a two year lay off from competition due to USAF training.

“What this sport gave me personally was people who took care of me,” said Steve Stenson. “It taught me morals and ethics and pointed me in the right direction. Because of the way I was treated, my wife and I now give back to the sport by giving other people what I was given.” Steve was inducted to the National Speedskating Hall of Fame on April 16, 2011 in Milwaukee, WI.