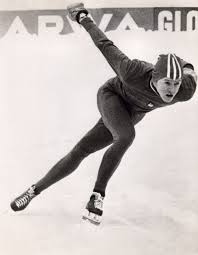 William was born August 6, 1948. He was the winner of seventeen National/North American/U.S. Open Championships in Short Track and Long Track. During 1964 through 1979, he set over 40 records in these championships. In 1966, he began skating metric meets and over the next eight years he was a member of every National, World, CanAm, and Olympic team. His highest achievement was in 1973, when he won the gold medal at the 500m at the World Long Track Championships in Deventer, Holland. William was inducted to the National Speedskating Hall of Fame on May 21, 1995 in Danvers, Massachusetts.

Sports-reference.com
Bill Lanigan won multiple US speed skating titles, starting in 1964 and 1965 with the US Intermediate Short-Track titles. He was US short-track champion in 1966-67, and 1969, and the US Open short-track champion in 1968 and 1969. Lanigan competed multiple times for the US internationally. In addition to his two Olympic appearances, he competed at five World Championships (1966, 1969, 1970, 1971, 1973) and two World Sprint Championships (1970, 1973). His best performance on the international stage came at the 1973 World Championships when he won the 500 metre distance title. Lanigan attended Marquette University, graduating in 1970. He later worked in product development for Amskate Company, and helped design a body jacket for people recovering from back injuries or surgery.