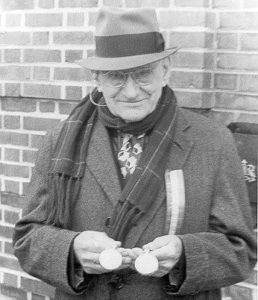 Al was born in 1874.  He was an early promoter of the sport; proposing and adapting cycling rules for speed skating mass starts, a sport he had extensive experience in as he had been an avid bicycle rider who held a variety of records. He served as an official timer for seventy years and was known for always being armed with two stop watches.

Al Flath was the second person inducted into the Hall of Fame in the Contributor to the Sport Category. We would not have our Great Sport were it not for the people who contribute their time and energy for the skaters. Obviously one of the very early people to organize the Sport!
Al was inducted to the National Speedskating Hall of Fame on May 14, 1966 in Colorado Springs, Colorado.