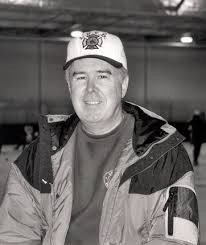 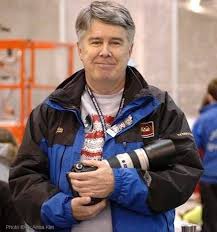 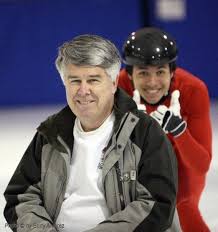 These few paragraphs just barely scratch the surface of Jerry’s devotion to the skaters he trained, and his dedication to making speedskating a better sport. He was inducted to the National Speedskating Hall of Fame on May 19, 2001 in Albany, New York.

Jerry grew up in LA, where he started speedskating with his brother Richard. After high school graduation he served as a radarman in the U.S. Navy from 1967 to 1971. He went to Santa Ana College, studying fire science while working for an airline company. He became a fireman and worked for the Long Beach Fire Department from 1977 to 2002, retiring after 25 years.

Jerry is credited with helping Olympian Rusty Smith in his early years, as well as Ryan Shimabukuro, who went on to become the National Team Long Track Coach in 2018. In 1988 Jerry anonymously provided a new pair of long track skates to a 12-year old who had impressed him after finding out her skates had been stolen and her family could not replace them. The young athlete was Chris Witty, who went on to skate in five Olympics, winning numerous medals, and also competed in the summer Olympics in cycling.

Jerry’s interest in skating went beyond helping young athletes. He was active as an officer and coach of Ice Club DeMorra. He was a prolific writer for the Racing Blade for 16 years, a contributor of photo layouts and video recordings on skating technique and training methods, and worked as an assistant coach and chaperone at training camps and seminars since 1984. Jerry was the Board of Control member for Southern California, He was a prime contributor to the ASU Handbook with material on the eligibility of skaters and the Code of Conduct for athletes. He created and managed the first website for the Southern California Speed Skating Association. He helped the Northern California group form their own governing body and encouraged members of their group to participate in the national organization, taking on roles in the Coaching Committee, the Scholarship Committee (Amateur Speedskating Union Foundation) and in revitalizing a national museum. Jerry created the original website for the National Speedskating Hall of Fame Museum. He created videos of many many National and World speedskating competitions and provided them to skaters at a very modest fee that did not even start to cover his expenses. He posted photos of skaters in his Jerry Search’s Photo Albums, just so skaters could see themselves. Jerry firmly believed that skaters can make improvements on their own if they could see pictures of themselves skating.

Jerry hosted weekend skating camps with great coaches, such as Dianne Holum, Pat Maxwell, and Guy Daignault, for skaters who might not otherwise have contact with these coaches. He shared the information from these coaches, and from Dr. Carl Foster of the University of Wisconsin, in order to help other skaters understand the principles of training.

Jerry had a collection of at least 35 pairs of skates he carried to speed sessions in his vehicle, so that skaters could try speed skating.

About 50 people gathered for a memorial picnic in Long Beach in September 2020. Wearing masks and practicing social distancing during the COVID19 pandemic, we celebrated our memories of Jerry. An additional 20 or so people from around the world joined via Zoom. You can see the video here.

Jerry provided a generous gift of $30,000 to the Amateur Speedskating Union Foundation through his trust. Jerry’s legacy of encouraging people will continue on through the college scholarships awarded by the ASUF.

We are looking for ways to preserve the thousands of photos Jerry took over the years. For now they exist on the Wayback Machine on these links: