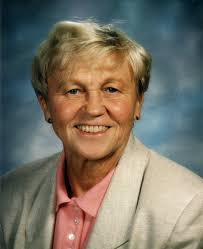 For Joan Peterson, skating is a family affair. Joan, with her four brothers and sisters, could often be found at local rinks in Minneapolis, Minnesota, skating, competing and socializing. She competed until she was 18, winning the Silver Skates competition and joining the Loring Speedskating Club. It was at one of those rinks where Joan met her future husband, Howard. They were married for 35 years before he passed away, and during that time Joan started a legacy of speedskating with her own two daughters, Lynn and five-time Olympian Amy.

Soon after her daughters started speedskating, Joan received a phone call from the local club. “Someone called me and said, ‘Bring your skates. We need help.’ I’ve been (refereeing) ever since.” Joan has officiated at short and long track events since 1976, working her way to Chief Referee at many national, North American and marathon championships. Eventually, Joan advanced to a Level 4 ISU Referee for long track events. She spent many hours on the track officiating and was the first referee at the national marathon.

Joan volunteered at the 2002 Salt Lake City Winter Olympic Games and was able to watch her daughter Amy compete in the short track competition. “Amy was chosen to carry the flag during the opening ceremonies,” Joan said. “That was really exciting.”  Born on April 23, 1935, Joan dedicated more than 60 years of her life to speedskating, whether it was competing in events as a teenager, officiating at local or national meets as an adult or serving on various committees and boards. She was inducted to the National Speedskating Hall of Fame on April 18, 2009 in St. Louis, MO.