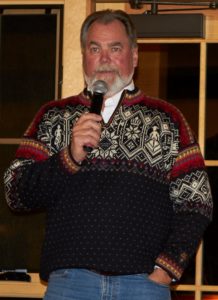 Michael Plant started in the sport of speed skating in the ‘70’s and in one way or another has been part of the sport ever since. Mike grew up in the West Allis, WI area, where he also enjoyed the more normal sports such as football, baseball and basketball, but at age 14 he decided to really focus on speedskating. He raced pack style both indoors and out, but finished his career as a long track skater. He went to the 1980 Lake Placid Olympics with his brother Tom and teammate Eric Heiden. He was a six-time World Championship team member.

Where Mike has really made his impact is in serving not only our sport, but Olympic related sports and events mostly on the political front. However, he has never forgotten his roots, where he came from and where his passion lies. He started supporting US Speedskating by being an athlete representative on the Board of Directors of the organization that predated USISA, the organization that predated USS. From there he went on to be the AAC (Athlete Advisory Council) as a representative for the USOC, where he served as the “Chair” of the AAC for four years. Mike quickly rose to the top by becoming a member of the USOC BOD, as well as serving on the Executive Committee.

Most notably though was the honor given to Mike as the Chef de Mission at the 2010 Vancouver Olympic Games. This position had never been held before by any speed skater.

In 2013 Mike was asked to step in as the President of USS. During his time as president Mike orchestrated the successful re-writing of the USS bylaws into a more contemporary and functional document. Mike also executed a USS Transition Plan to implement the changes set forth in the restated bylaws.