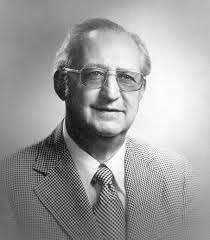 Philip was born October 9, 1906. He competed in local sports in Tennis, Football, Basketball, Ice skating, volley ball and golf. He was President of the Rogers park Tennis Club and was active in promoting and officiating cycling in the Chicago Area. His son Kent had a competitive career in speedskating. Philip started and helped to coach the Pierce Skate Club of Chicago in the early 1940s. He was president of the Pierce club, then President of the Illinois Skating Association, then Secretary of the Amateur Skating Union.
In 1961 Philip was appointed by the ASU to the Board of Director of the US Olympic Committee. In 1965 he was appointed to the USOC Executive Committee, elected to 2nd VP in 1969 and 1st VP in 1970. In 1973 he was elected President of the US Olympic Committee, for the quadrennial leading to the 1976 Olympics.
He worked incredibly hard for the recognition of achievements in Olympic style skating in the United States.
Through his efforts organizing support getting legislation through the State of Wisconsin, he accomplished financing and construction of the first 400 meter refrigerated Olympic rink in the United States, located in West Allis, Milwaukee. This rink, which opened in 1966 was eventually replaced with the Pettit National Ice Center.
Philip organized the United States International Skating Association, specifically to develop metric style skaters to compete at international long-track meets. With the aid of USOC funds, USISA was able to produce top medal winners for the US. Through his position, he successfully established the World Sprint Championships, the first of which was held in West Allis in 1970 in conjunction with the Ladies’ World Speed Skating Championship. In another first, he arranged for an electronic scoreboard to be installed for the competition, which measured times in the 100ths, rather than 10ths. In 1987, he was awarded the silver Olympic order of merit. He was inducted to the National Speedskating Hall of Fame on May 12, 1973 in Rosemont, Illinois.