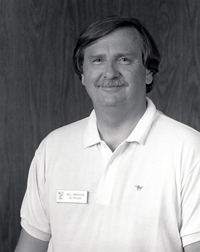 Bill was born March 9, 1946. A dedicated advocate for the sport, Bill Anderson made a significant impact on the sport of speed skating, at both the national and international level, for more than 15 years. Bill initially became involved in speed skating in 1987 as a parent of Kelly and Todd. The family joined the Park Ridge (Ill.) club and began to participate in local meets throughout Illinois and Wisconsin.

Bill soon became actively involved as a judge at the local level. The Anderson family moved from Chicago to Michigan in 1989, where Bill helped organize the West Michigan Speed Skating Club, and its signature events – the West Michigan Thanksgiving Classic and the Tri-State Invitational Meet. Bill was also instrumental in the North American Championships. He served in many leadership capacities for the Michigan Speedskating Association, including President from 2002-2005. He was elected as the Michigan Delegate to the Amateur Speedskating Union (ASU) in 1993, served as the ASU Vice President (1994-1998) and President from 1998-2000. Bill was a leader in the ASU-USISA merger, establishing and serving on both the Merger and Merger Implementation Committees. He served as an ASU Foundation Board Member from 2001-2010, and continued his involvement in the sport as a member of the North American Committee, US Speedskating’s Appeals Commission Grievance Panel, and as an international starter until he passed away on December 31, 2010.